You'll never believe what these thieving SCOOTER thugs did in London

Thugs in London attempted to steal BBC cameras in a shocking attempt to get away with the equipment, worth hundreds of thousands of pounds. 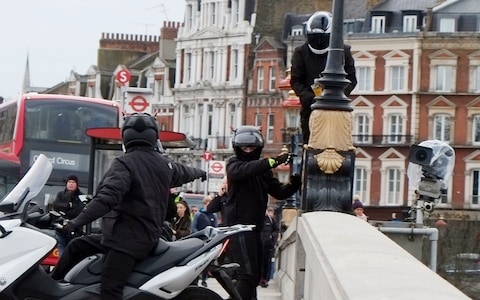 A moped gang with three bikes seen holding up the rush hour traffic on Putney Bridge attempting to steal a BBC camera secured to the bridge.

The thieves then drove to Barnes Bridge where they clashed with BBC security teams and cut down a BBC camera attached to scaffolding. The gang fled and remains at large.

Read: "What this Policeman did to his wife is DESPICABLE!"
Read: "Scum Burglars spray 'acid' in the face of 81-year-old in her London home!"
Do you like this post?
Tweet