Under pressure Speaker John Bercow MP has a sticker in his car that should see him FIRED!

House of Commons Speaker John Bercow is currently facing accusations of bullying and as such a parliamentary investigation is underway. Bercow is seen as one of the most divisive commons speakers in recent history as the speaker is supposed to be an impartial chair of parliamentary proceedings. The sticker he is proudly displaying in his car has caused fury around Whitehall. 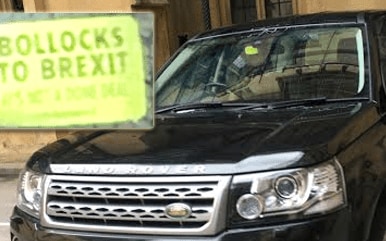 In his private space at Parliament in his luxury Land Rover he has put up the above sticker. A campaign such as UK Unity does not want to repeat this foul language but you can see for yourself that it is a disgusting attack on the 17.4 million people who democratically voted to Leave the EU on the 23rd of June 2016.

This is yet further truth that the establishment is doing everything in its power to thwart Brexit when even the supposedly impartial Speaker is displaying such messages. Bercow is set to continue as Speaker as it appears the Remain MP's will not allow for him to be removed.

Do you agree he should be removed from office now?

Read: "Shock Government report on numbers of people unable to speak English in the UK"
Read: "Nicola Sturgeon comes to London...."
Do you like this post?
Tweet