Trump fights back in Trade WAR with EU

US President Donald Trump has declared war on the EU over trade tariffs and has threatened to slap a massive Tax on imports of cars from the European Union. Trump said other countries and trading blocs like the EU had taken advantage of the US for years as it has signed up to very stupid trade deals. 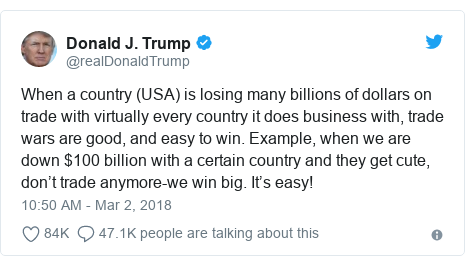 The opening salvo was fired when Trump said he is going to put tariffs on Steel Imports of up to 25% in order to protect American Jobs. This is part of his America First programme that seeks to look after his own people ahead of others. This has brought a stinging response from the EU who have also now threatened to put a 25% tariff on all imports from the US such as Harley Davidson motor bikes, Jack Daniels Whiskey and Levi's.

EU Commissioner Jean Claude Juncker went on German TV and fired back: “If the Americans impose tariffs on steel and aluminium, then we must treat American products the same way. We must show that we can also take measures. This cannot be a unilateral transatlantic action by the Americans. I’m not saying we have to shoot back, but we must take action. We will put tariffs on Harley-Davidson, on bourbon and on blue jeans – Levi’s.”

Commentators have noted that if the UK leaves the EU Single Market and Customs Union it will be able to strike far better deals with the USA and can avoid the tit for tat trade war that is set to heat up.

Do you agree we need out the EU straight away?