After the latest revelations about Jeremy Corbyn and the engulfing anti-semitism scandal the newspaper of choice for the 'chattering classes' (The Times) has thrown its full weight behind the man being seen by some as 'The Saviour'. There has been talk for sometime now that former Prime Ministers Major, Cameron and Blair as well as high profile MP's like Chuka Umunna and Anna Soubry are preparing to form a new pro-remain centrist party but it lacks a 'charismatic' leader. 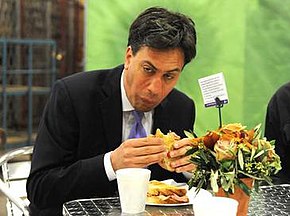 Former loser Ed Milliband famously stabbed his brother in the back in order to become leader of the Labour Party. His brother famously went into exile across the pond where he took up a £500,000 a year job for Rescue which is a 'charity' that backs mass immigration from Africa into Europe and tries to help facilitate this.

Step forward the return of the prodigal son in David Milliband! Milliband famously bottles it when thinking about challenging Gordon Brown and is a serial loser of elections. Today senior figures such as former Labour cabinet minister Tristram Hunt also came out to back Milliband returning as leader of this new 'centrist' party.

It is hoped that the new party would entice Labour 'moderates' away from Corbyn as well as Tory remainers and could potentially lead to the halting of Brexit. Jeremy Corbyn is looking increasingly weak and a fracture within Labour has long been predicted.

UK Unity Opinion- If David Milliband is the best that these remainiacs can come up with then it truly is a sad state of affairs. Like his brother he has made fortunes out of pretending to fight the 'poverty cause' and supported policies that have made the British working class significantly poorer. If David Milliband and his elitist bubble think that he will receive a triumphal return then he has another thing coming!

Read: "LEAKED Photos could finish Jeremy Corbyn!"
Read: "BREAKING NEWS- Loud bangs heard at raid on 'Terrorists' home in Dewsbury"
Do you like this post?
Tweet