CHEMICAL ATTACK- When you read what the German's are saying about it now it all makes sense....

Angela Merkel’s right-hand man Wolfgang Schäuble has made sensational comments to one of the largest media outlets in Germany regarding the apparent Chemical Attack in Salisbury. Schauble is the President of the Bundestag and was responsible for introducing the deep austerity faced by southern EU countries such as Greece. 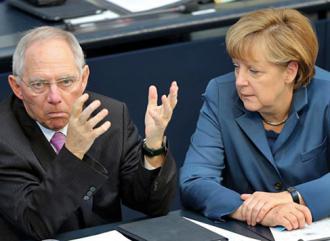 Schauble said: “In the Brexit campaign, the Britons were endlessly lied to and deceived and when they happened to be successful, the ones who did that ran away because they said they can’t take responsibility for that.” He then went on to talk about the Sergey Skripal case.

Schauble said that he hoped that this would be a wake up call to the British People that after the way other EU countries have expelled diplomats like the UK did it shows that we must stay in the EU, he says that this shows "Europe Works!". Not all EU nations have expelled Russian diplomats and questions could be asked as to how Europe works if this attack was allowed to take place.

The Government insists that Vladimir Putin was directly responsible for this attack but there is still no evidence to prove it. Likewise for such a tyrant as Putin those who did the attack failed miserably to do it properly as Skripal's daughter is now fine. After the attack Vince Cable and other remain politicians were quick to use this as an excuse to stay in the EU.

With Schauble's comments and increasing numbers of UK politicians saying we should stay in the EU some have even suggested this represented a "false flag" attack undertaken either by the EU or UK security services to undermine Brexit. Of course there is no proof of this either like with Putin but with Schauble's comments it only continues to add fuel to the fire of conspiracy...

Do you agree we need out the EU?

Read: "Any idea which city now has a higher murder rate than NEW YORK?!"
Read: "Doctor Death granted right to Appeal!"
Do you like this post?
Tweet