Further to Grey Man John Major's intervention another even more unpopular former Prime Minister has come out in what appears to be a co-ordinated attempt to thwart the Brexit vote where 17.4 million British people democratically voted to Leave the EU. Blair was speaking to a group of big business people in Brussels (pictured below) and then also went on Radio 4 to give his startling views. 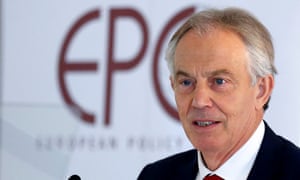 Like Major as well Blair believes that Parliament should be given a free vote on the issue which could eventually lead to a second referendum on the UK's membership of the EU, one which he believes Remain will win. Blair believes that once the economic realities of Brexit become apparent people will be begging to stay in the EU.

He said: "If, at this moment, Europe was to offer a parallel path to Brexit of Britain staying in a reforming Europe, that would throw open the debate to transformation.People will say it can't happen. To which I say in these times in politics anything can happen.

It doesn't take a miracle. It takes leadership. And now is when we need it. It is sickening the way the Good Friday Agreement is being sacrificed at the Altar of Brexit. The problem that she (Mrs May) has is that there is no way round the dilemma. What she thinks is that it's possible to get the European Union to give us access to Europe's markets without the same obligations that the rest of Europe has in the single market.

Do you agree Blair should keep his lying mouth shut?