Angela Merkel in TURMOIL over her latest comments on religion

Chancellor Merkel has managed to cobble together a coalition to run Germany for the next four years despite being heavily punished at the most recent elections. However a massive split has erupted within the Christian Social Union (CSU) and Christian Democratic Union (CDU), who are part of the coalition, over the role of Islam within German society. 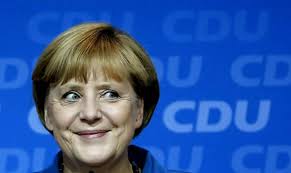 In an interview with the national Bild newspaper, Interior Minister Horst Seehofer stated the utmost importance of Germany's Christian heritage.“Islam does not belong to Germany. Germany has been shaped by Christianity. These aspects include shops being closed on Sundays, church holidays and rituals such as Easter, Pentecost and Christmas."

At a press conference Merkel decided to slap down Seehofer by saying: “These Muslims are also part of Germany and with them their religion, Islam, is just as much a part of Germany.” In a recent poll however over 60% of Germans rejected this notion and disagreed with Chancellor Merkel. Her coalition is extremely fragile and these disagreements could potentially see her brought down as Chancellor.

Merkel's decision to allow millions of undocumented "refugees" into Germany is set to change the face of not only her country but also that of Europe for many years to come and the general public is starting to speak out on this change that they did not vote for.

Read: "PC madness... Celebrating Knights & the Crusades is now offensive!"
Read: "Potentially THOUSANDS of ISIS child terrorists are in the UK!"
Do you like this post?
Tweet